On March 16th SYNERGY, the Caribbean network of leadership in Healthcare will be launched. The day will be opened by Bregje Boetekees, president of the network and operations manager of White and Yellow Cross Foundation. That is also where the meeting will take place.

Emil Lee, Minister of Labor, Health and Social Affairs on St Maarten will give a speech. Furthermore topics like Integrated care, Mutual auditing and Networking will be discussed. For more information email to: everard@onsnet.nu

There has been a schism in the World of Quality. This schism makes it difficult to understand others and to talk about what quality of any entity actually is. In our opinion the main reason for this schism is that people think from different paradigms. We, Hardjono and Van Kemenade,  describe these paradigms in the book “In search for a fourth paradigm in quality management”, that will soon be available.

The European Organisation for Quality as well as The American Society for Quality are dominated by the mindset of “measuring is knowing”.  We call this the Empirical Paradigm. However, not everything can be easily measured in meters, kilograms, seconds or amperes. Or, if you do, you do not catch the essence of what the entity is. Beauty, love, wisdom, trust are examples of this; but this goes for an organisation as well.

To solve this dilemma other quality experts introduce a model, a framework of reference in which criteria or areas to address are mentioned. Examples of this paradigm are the ISO 9000-series, the Malcolm Baldrige National Quality Award (MBNQA) criteria and the European Business Excellence (EFQM)Model. We call this the Paradigm of Reference.

A third Paradigm can be discerned: The Paradigm of Reflection (Vinkenburg, 2006) in which a group of people discuss the ins and outs of the quality of the object.

Let us take an example to clarify the differences between the four paradigms. The example is the thoughts and ideas of Donald Trump (as far as we can understand these from a European perspective).

When we compare what Donald Trump thinks and does with the Empirical Paradigm, we see little correspondence. Even, Trump has a disdain for scientists who often represent this paradigm. He denies the warming of the globe, although empirical scientific data prove this is actually happening. He even claims Obama was born in Kenya, although that is not the fact. There are dozens of examples more. He just does not want to measure and wants to collect data in his own manner.

When we compare what Donald Trump does and thinks with the Reflective Paradigm, again we see little correspondence. Representatives of this paradigm take a final decision after discussion, after hear and listen. Trump discusses rarely and shows little reflection. That is also the impression that you get, when you read Trump’s tweets. Trump seems to tweet (and act) impulsively. Trump hates the media, who often represent the Paradigm of Reflection. The media spread ‘fake news’ and are all against him, (but a few). He decides after having listened to the last one he met.

You could argue that there are some characteristics of the Emergence Paradigm in Trumps, activities and thoughts. He improvises on the flow of events. But representatives of the Paradigm of Emergence like to hold a deep dialogue, especially with those who have a different opinion; like to consider a topic from different views and angles and take a decision (for the time being), until more knowledge is gained or the context has changed. If so, Trump’s way of working is most related to the cases in which the Emergency Paradigm is exaggerated and leads to haphazardness rather than improvisation.

Trumps thoughts and actions have the most in common with the Reference Paradigm. Representatives of this paradigm use a reference, a model to decide what to do and think; what is right and wrong. You would expect the model used by Trump to be the Republican mindset, but that is too easy. Like Roger Stone, a long time Trump friend and political adviser said, Trump does not represent a Republican Brand, but a Trump Brand. “The Trump Brand and the Republican Brand are two different things”. This mindset defines what is good and bad, what quality is for him. But nobody but Trump himself knows exactly what that means. 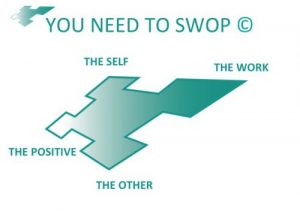 In November a training was organised at Statia for staff from Queen Beatrix Medical Centre and St Eustatius Auxiliary Home. The topic was Person Centered HealthCare. Underlying principle in the course was that “happy staff make happy patients”. Theories, experiences, practices were exchanged about how we can stay happy in our work. All suggestions were summarised in the SWOP (c) principle. SWOP stands for attention to the Self, the Work, the Others and the Positive as guiding principles for happiness in your work. SWOP is also about making the change, “swop” from a negative to a positive attitude. Participants rated the course 4.2 on a five point scale. The participants especially valued that they got the chance to express themselves and their concerns. Improvement could be made by changing the time of the course from 8-4 rather than 9-5.

Standards of the Joint Commission International (JCI) are popular, also in Long Term Care organisations, also in the Caribbean. Often these standards are used for internal auditing. The JCI standards from the original first edition for long term care organisations appear to be quite complicated and too formal for daily use. White and Yellow Cross at Sint Maarten asked me to develop a simple, but effective guideline for internal auditors, easy to use in the Caribbean context, based on JCI standards. I’d like to thank everyone who worked with me on this project, especially the internal auditors from White and Yellow Cross that provided me valuable insights that made it possible for me to develop to this document.

A sample of the document can be found here.  Reactions are welcome.

Sint Maarten has been heavily damaged by the hurricane Irma last month. I feel strongly connected to the people that I have been working with the last few years. I wish everybody the strenght  and wisdom to cope with this disaster. I have the trust that the people of Sint Maarten can keep their hopes up to improve what needs to be improved.

At the end of this month I am scheduled for a training at Sint Eustatius. On transit I hope to visit Sint Maarten.